Handling Life as it Comes 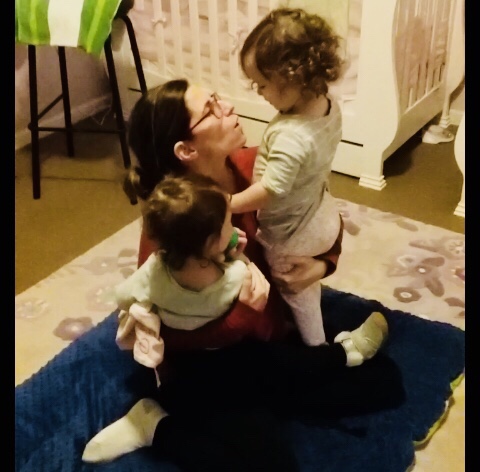 Living life off the cuff — that’s what this entire blog is about;  being able to go with the flow, take life as it comes, handle whatever comes my way.

As I write those terribly cliche phrases, I can’t help but feel my anxiety rise up from the tips of my toes straight up my spine.

I am not good at “going with the flow”. I never have been.

But I am quite convinced that the reason I was blessed with three children — a single and twins — is to help me learn how to do just this: live in the moment and gain confidence in my abilities to handle what life tosses at me (without a sh*t ton of advance preparation).

I will never like doing this–it goes against every fiber of my being and makes me incredibly uncomfortable–but I do realize that it’s not only crucial to my mental health and well-being, but also the for happiness and health of my kids. They deserve a mom who isn’t constantly planning for the future and worrying about an endless (and usually absurd) list of “what-if’s”.

So a couple of weeks ago, before my husband was set to leave town for over a week (his longest trip since our twins were born), the panic set in.

“What if the kids all get sick when you’re away? What will I do?” I asked him.

“You’ll handle it,” he said with confidence.

I found his confidence in me astounding. Why couldn’t I feel the same sense of assurance in myself that he so obviously had in me? How could he be so positive that I would know just what to do if things somehow went wrong when he was away?

A few days later he boarded his plane, and within 48 hours, the sh*t promptly hit the fan.

My twins, totally healthy the day before, spiked fevers. Though the fevers started as fairly low-grade, over the course of 24 hours they got higher than any mom would be comfortable with. My nanny and I took them to the pediatrician’s office, where, after several tests, one was diagnosed with a urinary tract infection, and the other croup.

At home, their moods steadily declined. Like, A LOT. Clearly, they were incredibly uncomfortable.

My nanny and I also became sick (well, to be fair, we had been sick for several days, but suddenly our symptoms worsened too). We were exhausted and achey, but had no choice but to care for the even sicker kiddos.

That night, one of my 22-month-old twins woke hysterically crying in the middle of the night. I went to her, pulled her out of her crib, and let her spend the rest of the night in my room. She was just miserable.

The next day, the other twin became increasingly fussy, and in the middle of the night, woke screaming “MAMA!” over and over again. I ran to her, and she had vomited all over her crib. When I grabbed her out, her body felt like a space heater. She was on fire, and totally hysterical and inconsolable. It was 2 am, and I panicked.

I felt terribly for doing so, but I called our nanny. She is a true saint who loves my children like her own. She came right over to watch the other two kids, so I could bring this one to the hospital. We spent the next two hours in the emergency room, and, oddly enough, this child also had a urinary tract infection, in addition to a virus.

When we finally got home from the hospital around 6 am, my other two kids were just waking up…that was a loooooong day.

There’s so much more: like the viral rash that broke out all over the other twin’s body, the dishwasher leaking, the washing machine leaking, the funky smell coming from the pipes in the basement bathroom, etc…

During the course of the week, I cried several times, begged my husband (who was on a trip of lifetime for his 40th birthday: Fantasy Baseball Camp) to come home, panicked, felt awful for my kids and terrible for my amazing nanny who worked overtime (while also sick) to help me out. I definitely felt the old pangs of depression and anxiety creeping in, and I have to be honest…it was hard to fight them off.

Because you know what? It wasn’t always graceful, but I handled it. There was no time for advance planning and thinking things through thoroughly. I simply had to deal with exactly what was in front of me at that particular moment, and go with it.

This afternoon I was thinking about why everything happened (because yes, I’m that cheesy person that just has to believe that things happen for a reason–you know, to make sense of out tough times and find meaning in challenges), and it hit me: it happened to show me that I am capable of handling life as it comes–even the parts of it that cause me terror and dread, like taking good care of sick children on my own; I may not always like it, but I can handle life in the moment, off the cuff.

What a truly amazing life lesson.

I’m happy to report that (knock on all the wood in the world) the germs have finally left our house…for now.

Oh, and also that my husband is never, ever allowed to leave the house again. Ever.